A MONUMENT TO FREEDOM

Veryl’s monument of five horses, one stallion and four mares, running through the rubble of the collapsed Berlin Wall took nine years from concept to final installation.

At the end of WWII, Germany was divided into Communist East Germany and Democratic West Germany.  Germany then became the center of a Cold War that developed between the Soviet Union and the United States.  The German capital of Berlin was deep within East Germany and the city itself was divided into four sectors, one each for Britain, France and the United States, the Allied powers and the remainder controlled by the Communist Soviet Union.  The three sectors controlled by the Allies was called West Berlin.  In 1948 the Soviets attempted to starve Democratic West Berlin into capitulation by cutting off all ground travel including food and supplies to West Berlin.  In response, the Allies took to the air and supplied West Berlin with millions of tons of food, supplies and coal to the people of West Berlin.  This herculean effort performed primarily by the United States Air Force lasted for 18 months until the Soviets again opened the roads leading to West Germany and beyond.

The second or “American” casting is permanently displayed in the central courtyard of the George Bush Presidential Library, adjacent to the campus of Texas A&M University. This second casting was first placed on loan to the state of Georgia for the 1996 Olympic Games and then moved to the new Presidential Library when it opened in the fall of 1997.

“Roger and I had the pleasure of being with President Bush five times during the nine years it took to create and place two sister castings of “The Day the Wall Came Down” – a 7 ton monument to Freedom celebrating the fall of the Berlin wall.”

Watch as the German casting is flown to Berlin by the United States Air Force on the 50th anniversary of the first Berlin Airlift Flight. A gift from the American People.

In August 1961, the Soviets along with East Germany built a 105 mile containment wall completely around West Berlin.  This 5 meter high concrete wall became known as the Berlin Wall.  The intent of the wall was to stop East Germans from fleeing Communism to West Berlin, shooting them if they tried to flee to the political freedom enjoyed by West Berliners.  The Berlin Wall thus became the prime symbol that separated European Democracy from European Communism.

After 28 years of blocking people from freedom in the West, on November 9, 1989 the Berlin Wall could no longer contain those seeking relief from Communism.  The collapse of the Berlin Wall lead to other European Communist nations to reject Communism, freeing all of Europe, with the exception of the Soviet Union, from Communism.

Watching the collapse of the Berlin Wall on television with East Germans streaming through its openings into West Berlin caused Veryl to have a dream that night.  She had been sculpting small horses in clay and her dream was that her clay horses were galloping over the rubble of the Berlin Wall to freedom in the West.  Over the next few years, Veryl’s dream was transformed into two sculpted 14,000 pound bronze monument celebrating the end of the Berlin Wall and with it, Communism in Europe.  Veryl used sculpted horses to represent people because horses in art have represented freedom and her sculpted horses could then represent all people who seek political freedom.

There are two monumental castings of “The Day The Wall Came Down.”  An American casting in the George H. Wl. Bush Presidential Library and a German casting in the Allied Museum in Berlin.  The German casting was delivered by the United States Air Force to Berlin’s Tempelhof airport on June 26, 1998, as part of the 50th anniversary celebration of the first Berlin Airlift flight into West Berlin.  Former President George Bush ’41 unveiled Veryl’s sculpture.  These twin monuments to freedom will forever remind us of the strategic partnership between West Germany and the United States which together, defeated Communism in Europe.

The horses in Veryl’s sculpture transcends ethnic, political, cultural and religious diversity among peoples.  The horses represent humanity and Veryl’s sculpture represents a resounding victory.  Not only a political victory but importantly, one of the human spirit.  As one person reflected, “This sculpture carries no one’s flag – yet it carries everyone’s flag.” 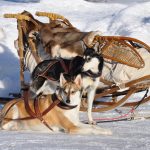