“The Sage” represents the simple majesty of a mature bull bison moving through the sagebrush of his native prairie.  An artist brings their own experience to a work of art and my viewpoint is influenced by the history of Charles and Mary Ann Goodnight and their role in helping save bison during the slaughter of the late 1800’s. My connection to bison became very personal when raising an orphaned calf in order to tell this story. Charlie Buffalo was a huge chapter in my and Roger’s lives.  When viewing a recent exhibit on bison, I was struck by the fact that the vast majority of depictions were of the buffalo either dead or being killed. I wanted to present a living, breathing bull bison – an individual with the will to live.

Email about “The Sage”
Related Projects 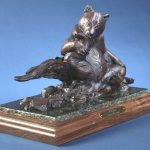