Thousands the world over are recounting memories of President George H. W. Bush to celebrate his remarkable life. Roger and I had the pleasure of being with President Bush five times during the nine years it took to create and place two sister castings of “The Day the Wall Came Down” – a 7-ton monument to Freedom celebrating the fall of the Berlin wall. The German casting was flown to Berlin by the United States Air Force as a gift from the American People and the American casting is at the George H. W. Bush Presidential Library, Texas A&M University.

At this momentous time in our history, we wish to share with you a few memorable times with the 41st President of the United States.

Our first meeting with President Bush was at Texas A&M University long before his Presidential Library was built. A devoted Texas Aggie, Joe Moore, invited Roger and I to attend an A&M football game which coincided with a fundraiser for George W. Bush, who was running for Governor of Texas.

It was Joe’s goal to convince us that the American casting of “The Day the Wall Came Down” should be in College Station at the soon to be built Presidential Library, and to convince former President Bush that the monument was appropriate for his Library.

We were directed by Joe to an autograph line with our portfolio of photos of the monument. When it came our turn, I recall President Bush signing a soccer ball while not taking his attention away from me.

He was very well aware of the sculpture and said to us about Berlin, “The history hasn’t been written yet. I was criticized for not jumping up on the Wall and claiming Victory but there were very delicate negotiations going on. The Russians were about to do some very nasty things.”

He later joked that Helmut Kohl practically lived at the White House that following year and stated “Our food bill doubled.”

He then asked Roger how he could have the monument at his Library. Roger said all he had to do was say he wanted it.

His reply was, “You mean I get to make a decision!?”

President Bush did get “His Horses.” Roger installed the monument in August, 1997 in temperatures that were soaring into the upper 90’s.
Later Texas A&M sent out invitations and press releases for a special ceremony to formally present the monument to President Bush and the Library.

The problem, however, is that NOTHING takes place at A&M during football season unless it is tied to a football game. They forgot to consult with President Bush as to HIS schedule and he was unable to be present. It was a grand ceremony none the less and President Bush made up for the embarrassing scheduling error in the years to come.

PRESIDENT BUSH’S CONTRIBUTION TO THE GRAFFITI

Graffiti on the face of the monument includes a “Dove of Peace” fashioned from clasped hands. I had replaced miscellaneous names on the Dove from the original graffiti with names of people whose lives were dedicated to fighting for human rights such as Martin Luther King and Gandhi. I also included Chief Joseph of the Nez Perce Tribe, whose famous words of defeat “I will fight no more forever” are well known to every western artist – but not to a New Englander.

I was told that when the monument arrived, President Bush, accompanied by Barbara and son George, crawled all over it and read every word – stopping when he came to the Dove of Peace and asking “Who the hell is Chief Joseph?” Oh well. You can’t expect him to know everything. Very politely and apologetically, I was asked if I would mind changing the names on the Dove to those of people who had died trying to escape the Berlin Wall to Freedom in the West. I did – and you know – it was a much better idea. 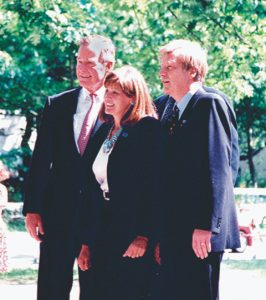 I was called to the podium first, followed by President Bush. He was humble and self-depreciating, complimenting my speech while saying that he was known as “the President for whom English was a second language.” He asked me to come back to the podium for the actual unveiling. The silk parachute caught on the ears of the highest horse and he climbed up on the bronze wall sections to dislodge it, then faked falling before jumping down. The hundreds of motor drive cameras went crazy!

With a high five and a conspiratorial smile, he then put his hand on my back and said “Come on, your fans want to meet you,” as he took me forward to the roped off wall of people. I have never seen so many photographers in my life. Some were on the ground, others on ladders and they stretched as far to the left and right as I could see.

The unveiling was followed a few days later by a grand 4th of July party at the home of the American Ambassador, where once again President Bush was warm and gracious to all. A humorous aside was that Roger was repeatedly mistaken for his son. “Would you and your father like to play golf” was one of the questions a German man asked Roger. Roger responded by saying that his father liked golf, but he passed away years ago. The man quickly moved on. 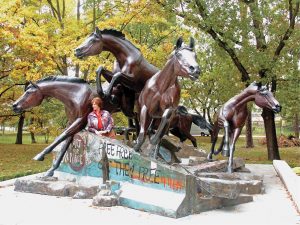 “The Day The Wall Came Down” at Germany’s Allied Museum in Berlin.

In Berlin we stayed at the famous Adalon hotel next to the Brandenburg Gate, where President Bush was also staying. Exhausted and euphoric, the next morning I went for a walk alone, reflecting that I had the freedom to do so. President Bush, whose entire life had been spent protecting freedom, did not have the same freedom. He could not take a walk without his seven secret service men accompanying him. Like most average citizens, I was oblivious to the sacrifices that our leaders make so we can lead “normal lives.”

President Bush served in several freedom preserving parts of our federal government – the Navy, the CIA, Ambassador, Vice President and lastly as our nation’s 41st President. 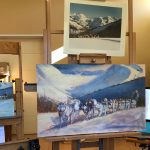