“Out of Asia” depicts an imaginary family from Northeast Asia, migrating across the Chukchi Sea to North America. This is a scene that would have taken place 6,000 years ago when dogs were vital to the survival of people living in Northern latitudes. The idea was inspired by Alaskan legend, Joe May. Among his many accomplishments, Joe won the famous Iditarod Dog Sled Race in 1980. During a visit to his home in May 2021, he presented me with his essay, along with a challenge to paint the first dogs arriving on American shores. VG

Email about “Out of Asia”

Six millennia before John Steinbeck wrote ‘The Grapes of Wrath’ with its imagery of the Joad family and all their possessions piled in and on a bastardized “Hudson Super Six” fleeing the worn out fields of Oklahoma, bound for California, a ‘Promised Land’,

an analogous drama played out on the western shores of Bering Strait.

Boethius, an old Roman, said, “History is a wheel”. It must be so.

The crude walrus skin boat was dangerously overloaded. Barely a

hands-breadth of freeboard showed above the frigid Chukchi waters.

The women hadn’t been inclined to leave anything behind–choppers, knives, and lamps–all made of stone. The men added to the prodigious load with weapons and tools, more stone, including a skin bag of precious obsidian. They were going to the New World, reportedly a bounteous land of endless promise, and were determined to arrive prepared for every eventuality–even a shortage of good stone.

Asia, the old world in their wake was history, the new world, the future, loomed on the horizon behind hazy mountain tops, sixty miles away,

across the cerulean strait.

Children clambered dangerously over bundles of bedding and skin tents. They hung perilously over the side trailing fingers in the water, and as children are wont, were impervious to warnings from elders who themselves were awash in adrenalin – giddy with anticipation. Laughter and shouts permeated the air as dogs and puppies dodged between paddlers’ feet – barking at swooping sea birds

– or just barking for the joy of it.  JM 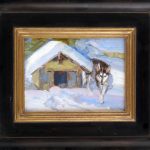 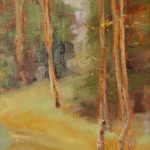