Not Released For Sale At This Time

Watch the video below to learn more about the history behind “The Gold Rush Dogs” and how the painting was created.

“The Gold Rush Dogs” was inspired by Jack London’s “Call of the Wild.” It wasn’t until I began researching the history of sled dogs that I realized a black market for dogs during the Klondike Gold Rush of 1898 was a reality. Buck may have been fictional, but he represented 1000’s of dogs stolen “from Puget Sound to San Diego” and shipped to Alaska
to serve needs of men and women struck with gold fever.

I spent several years collecting photos of dogs that would have been likely candidates for theft – Newfoundlands, St. Bernards, and Great Pyrenees were among those that were most sought after, as were dogs of the Northland.

I commission a historic sled with plough handles and had leather collar harnesses made for my own recreational team of dogs. Professional musher, Rick St. Onge, modeled as the dog driver, with a 1,000-mile stare that was the hallmark of the gold seekers. To emphasize the diversity of the dogs, I choose a still life composition set, against the northern lights.

The final painting is large – 40H x 80L – so you can look into the dog’s eyes and let them tell their own stories.

“The Gold Rush Dogs” is a Tribute to the Dogs that Enable Our Dreams.

I spent several years sketching many different  approaches to composing the dogs that would represent both the stolen dogs of Klondike and dogs of the Northland.  Retired professional musher, Rick St. Onge, modeled as  the dog driver and gold seeker, standing behind a historic sled with plough handles, packed with a miner’s pick and gold pan, and assuming the 1000 mile stare you will see in so many historic photos. Two of the “recently stolen” dogs have ropes tied to their necks and several are wearing leather collar harnesses typical of the late 1800’s.

I drew and tossed 100 different dog sketches before settling on these dogs and this final composition. Eye contact with the centrally placed dogs became vital,  as it let these dogs tell their own story. My own Hardy, a Hedlund Husky from Alaska, anchors the entire composition, for he is the very epitome of the long-legged rangy huskies  that were once vital to the survival of people in snow laden parts of the world. 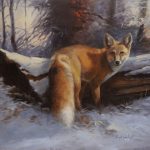