In 2022, Denali National Park will celebrate 100 years of using sled dogs for Winter Patrols. Today the Park Kennel manages a sustainable team by raising just one litter each year to replace the dogs that are retired at the age of nine. There is a long list of people who want to adopt a retired Denali Park dog. When there is enough snow for the rangers set out across Denali Wilderness, the puppies go too – free running alongside the team dogs. By the time the puppies are seven months old, they begin wearing harnesses, but they are not hooked up to pull until the following season.

Prior to beginning a painting, I do preliminary sketches to work out the various challenges. The most difficult thing I encounter with painting sled dogs is getting the scale of multiple dogs right. The more dogs in the painting, the harder it is. I tape rough sketches all over my studio walls so they can be evaluated at a glance. Many of these sketches end up in the trash while others become the foundation for a painting – often after significant adjustments.

In this sketch, the five 7 month old puppies from the 2018 litter crowded around the sled of Ranger Julie Carpenter as they sped past me on Wonder Lake. I see several changes to be made prior to launching into a full scale painting. I also plan ad the team dogs in order to tell the complete story. The cargo sled, part of which is showing in this sketch, will be eliminated so the painting won’t be too long. I needed to get this idea down while it was still fresh in my mind, but won’t likely begin the painting until 2020. 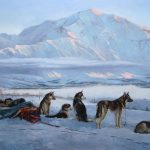 Under The Spell of DenaliAnimal Partner Paintings, Sled Dogs 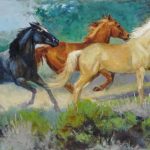