“Under The Spell of Denali”

March 2019 I had the privilege of painting along the very route that Hudson Stuck and Harry Karstens used on the first successful assent of Denali in 1913. That assent, as well as previous attempts were only possible with the aid of dog teams. The dogs you see in this painting are still hauling climbing gear today onto the lower elevations of Denali
to facilitate climbers along this historic Northern Route.

“Under the Spell of Denali” is on display in our gallery in Mancos. It will be released for sale after two additional major paintings are
completed this coming winter. 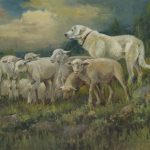 Guardian of the MeekAnimal Partner Paintings