The very word “Mustang” evokes images of Freedom and the American West. Horses returned to the American Continent, the land of their earliest evolution, in 1519 when Cortez landed in Mexico. Many later escaped and migrated northward, to proliferate on the western prairies of what became the United States. Their story and their impact on American History is much more complex than a simple vision of Freedom, for it was the horses that were captured and became partners to man, that left the deepest hoof prints in history. Without the horse to pull our wagons and plows and to carry our soldiers, the map of the United States would be very different. The Mustang is the Unsung Hero of our nation. 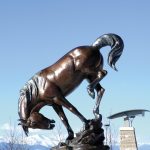 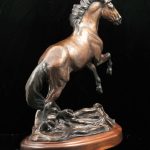